Join the fight and help us discover the genetic basis of ALS. Start or support a local initiative to raise funds. Project MinE, make it yours!

100 percent of all donations to Project Mine will go directly towards the mapping and analysis of DNA profiles.

The Swedish ALS Research Center at Umeå University (UmU) and Umeå University Hospital (NUS, Norrlands universitetssjukhus) was established in 1992. The Research Center is closely associated with the multidisciplinary Clinical ALS Team (CAT) at the university hospital that provides diagnosis and care for patients with ALS and their relatives. Clinical research includes testing experimental new medications in phase 1, 2 or 3 trials in collaborations with the pharmaceutical industry but we have also performed investigator-initiated trials sponsored by patient organizations and private foundations.

Clinical research also includes neuropathology, imaging, neurophysiology and biochemistry studies, in fact we participated in the 1990’ties with the development of the assay for detecting neurofilament type L in cerebrospinal fluid. Since 1994 we have performed neuropsychological studies in ALS patients and have validated Swedish versions of ECAS.

Basic laboratory research activities focus on understanding the underpinning molecular biology of the different types of ALS diseases, with a focus on ALS caused by mutations in the genes called SOD1, C9orf72HRE and TBK1. In 1995-1997, we generated transgenic mice ALS models by “transplanting” into mice the D90A SOD1 gene and the G127X SOD1 gene we had found in our ALS patients. These mice ALS-models have later been of immense importance for our research into identifying disease mechanisms in ALS and the identification of three different kind of SOD1 prions.  We have also performed treatment studies in these mice, the latest studies involved injecting antibodies against misfolded SOD1 prions.

An absolute key to both the clinical and the basic research is a better understanding of the many genes that shapes a human being and may confer a risk or reduce the risk for getting ALS and similar diseases. We have performed ALS genetic research since 1993 and have participated in many successful international genetic studies. These studies also include comparing blood samples from patients in other countries who are descendants of emigrants from Sweden (e.g., to America, Canada or Australia). Since the first ALS gene was discovered in 1993 (the SOD1 gene), we have learned that there are many genes if mutated confers an increased risk for getting ALS, but also that there are other genes that may not cause also but will influence how the disease eventually develops. Finally, and perhaps most importantly, by comparing DNA with clinical examination of patients with different types of ALS disease and living in different countries, we have been able to identify genes that appears to have a protective role in ALS or at least slow down the disease progression rate. Learning more about the genes that influence and protects against ALS is of the greatest importance and have obvious value for the development of new therapies.

In ProjectMinE, we analyze and compare the entire human genome between patients with different types of ALS and healthy individuals in different countries. The overall aim is to get better understanding of the ALS disease and develop efficient treatments and hopefully also medications that can prevent people from getting ALS in the future.

ProjectMinE has been approved by the Swedish Medical Ethical Research Committee.

For donations to Project MinE Sweden, please (for the moment) contact Professor Peter Andersen.
We will regularly update the statistics on the Project MinE website to reflect the status of fundraising for Project MinE in Sweden. 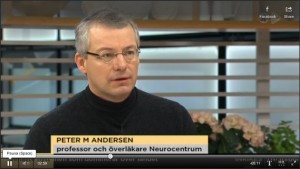 May we introduce our experts?

Project MinE research in Sweden is performed at Umeå University.

In Sweden fundraising for Project MinE is supported by Swedish Brain Research Foundation.